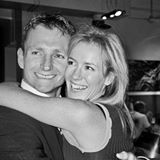 Alwyn, myself and the girls arrived at the hospital this morning to find Russ being tended to by two rather stunning physiotherapists (typical Russ!) so we had to leave for a while for them to finish. Alwyn put in a bid for them “to give him whatever Russ was having” which humoured Russ (and the physios!).

Anyway, we spent all morning with Russ and he was clearly pleased to have us around his bedside. Its still nigh impossible to understand what he is mouthing so we just try to persuade him not to even try saying anything (other than simple “pointing” antics and “yes” and “no”) as he gets frustrated and we feel awful for not being able to understand him. As we keep reassuring him, the tracheotomy will be removed sometime in the next week or so and he will then be able to speak to his heart’s content (and, no doubt verbalise what morons we’ve all been in not even having been able to understand his most simplistic of “mouthings”).

As he seems to have perfected the art of drinking water despite the tracheotomy, we asked the medical staff if he could have some ice-cream and they agreed. One “Solero” later, he was a very happy chappy. It sure must make a change from the protein goo that has been pumped into him via a nasal tube for the last 4 weeks.

For the last few days, the doctors have been taking Russ off the ventilator for a short period twice per day. The first day it was for 2 periods of 30 mins, yesterday for 2 periods of an hour and today for 2 periods of 2 hours (preceded each time with a blood transfusion to maximise the oxygen in his blood). The idea of this is to keep increasing the periods until such time as they are satisfied he can come off the ventilator altogether. At that point, the tracheotomy can be removed and he will be able to talk, eat and drink as normal which will be a huge milestone.

Whilst there had been some early concerns that Russ’s cardiac arrest when in surgery on arrival at hospital (it took them about 20 mins or so to get the heart beating again) might have resulted in lack of oxygen to the brain and some form of brain damage, these concerns have melted away. Whilst he can’t speak at the moment, he is clearly very alert (when awake) and seems to know what we are talking about whatever the subject we choose. He has also confirmed that he understands what the french medics are talking about when they are discussing treatments etc in his room (his french was always pretty good). So, we’re all confident that he is still “Russ”, down to his humour which has also been very evident during the last few days.

He understands all the injuries he has incurred as his little bro, Stuart, and I have been through them all with him. Most importantly, he knows he’s incurred a spinal chord injury and this is why he can’t feel his legs. I’ve explained (small mercies) that it is at T11 which is low down, below the naval, and that this, importantly, means he has use of all his core muscles which will count for a lot going forward, not just in terms of day to day living but, also, in terms of all the new sports Russ will undoubtedly turn his hand to in the future.

Of course, the spinal injury is something we will be getting second opinions on when Russ is fit to be repatriated to the UK but we all know that there is no surety of any “easy fix”.What absolutely amazed me about Russ’s response to me telling him of the details of the spinal injury was just how admirably sanguine he was about it. Such stunning bravery.

Anyway, as I told him, lucky that he had already completed pretty much every sporting challenge there exists on earth before he had the accident. Also, he already knows that there are an awful lot of people who are lining up to get him involved in new sporting challenges as soon as he has regained his health and been fully rehabilitated, so still everything to play for, sporting wise. In fact, James Cracknell has already emailed Russ to say that he is busily looking at stuff they can do together once Russ is ready. James and Bev are coming out to see Russ next week so no doubt plans will be hatched, time-tables prepared and wheels put in motion by the end of that visit :-s

So, some light at the end of the tunnel for us all. When I think of my arrival in Toulon four weeks ago, I was told that not only had Russ nearly died in theatre but that he might yet still not make it due to the severity of his many injuries. It was also made amply clear to us that the potential cardiac-related issues with the brain might mean that, even if he did survive, he might never wake up or that, if he did, he might be brain damaged. We’ve come a long way since then and it is clear that the doctors here are amazed and impressed.

I know there is still a long road ahead but I have never been more proud of Russ and the sheer “fight” in the man. As everyone knows, I love him endlessly. And what has been so lovely to know is that there are literally hundreds of people (both family and friends) who do too.

Thank you to everyone for all their amazing messages of love and support throughout this ordeal. It has been of such huge comfort and I know that it means that Russ, I and our beautiful daughters can all feel very positive about the future.

4 thoughts on “Message from Dani x”