Yesterday wasn’t a very positive day as Russ didn’t wake at all and was sedated again as he required an endoscopy on his lungs.  It seems to be a small step forward and a tinier one back each day and is very frustrating for everyone waiting for him to come to the surface.

I gather today has been another step forward as Russ was definitely responding to stimuli and had his eyes opened and attempted a couple of smiles.

Tomorrow he is having a tracheotomy fitted to assist his badly damaged lungs with breathing as it’s anticipated that the ventilator down his trachea will no longer be tolerated as he draws near to full consciousness.   For this procedure he will need to be sedated again and this in turn might cause another couple of days of drowsiness.

On a positive Dani is drawing alot of strength from everyone’s visits.  My other sister Sam and her husband Billy were out over the weekend as was the stalwart that is Dan White and his lovely family and also the great Dr Gerry!  Russ’s parent’s Bob and Di continue their vigil along with my mum Jenni.  Today Dani and mum have taken Amber to the zoo in Toulon between visits to the hospital, Amber is coping amazingly but I know she will really be looking forward to seeing Lily when they fly back to London on Thursday.

The lovely Chrissie Marty has just sent the below this evening which is really encouraging!

OMG! It was so lovely to see everyone. Dani, as you know is just amazing!

I had prepared myself for the worst before seeing Russ, and was pleasantly surprised. He was sleeping when Dani, Amber and I went in and woke up straight away. Dani left Amber and I chatting to him. Amber’s just wonderful. She plays with his hair and chats away. Then I started teasing Russ about something, and suddenly he smiled, rolled his eyes and opened his mouth a little, obviously wanting to tease me back as he usually does. He then frowned with frustration. I said, ‘hold that thought’ and he smiled. Then your mum came in and he smiled at her, and while we were joking about something he actually made an attempt to laugh. It felt like he was just as much a part of the conversation. It was lovely!
I held his hand the whole time and Amber and I stroked his forehead whenever he frowned, which relaxed his brow.
xxxx

Not much to report today.
Dani and Russ’s very good friend Dr Gerry has been visiting Russ. There is no change really, Russ very sleepy and not inclined to wake up. Gerry feels it is going to be a very, very long process. The main concern is that he hasn’t yet woken up and there doesn’t appear to be any obvious explanation. The MRI, EEG and scans haven’t shown up any problem so it remains a mystery. We wait and hope. Maybe he is just being stubborn Russ!  At the moment we will stay satisfied by the knowledge that his tests have all been good. xxxx

Just incase you were considering visiting I thought I would put some tips on here regarding hotels and transport.

If you fly to MRS, there is a shuttle bus that collects from outside all terminals at MRS airport and takes you to Marseilles St Charles train station.  The shuttle bus runs every 15-20 mins and takes approximately 20 mins.  It costs 8E per single journey.  You can book online in advance or buy at the airport:
http://www.digitick.com/index-css4-marseilleprovenceaeroport-pg101-ri1109907-qt244905e1.html

At Marseilles St Charles you can catch a train to Toulon.  This takes about 50 mins and they trains run almost every hour but being French are often subject to strikes (as I found out to my detriment!).  It is much better to book the train in advance as it can sometimes be full. http://www.voyages-sncf.co.uk
It costs 15E for a single.

Hôtel Amirauté is situated in the centre of Toulon, near Place de la Liberté and the harbour. It offers free Wi-Fi access and air-conditioned accommodation equipped with satellite TV.
Guest rooms at the Amiraute have a work desk and a fixed phone line with free calls to 18 destinations, including the USA, the United Kingdom, China and Canada.
A full breakfast buffet is served each morning at the Newhotel Amiraute. The hotel also provides a 24-hour reception.
double room : 70€ (approx £59) per room per night


Alba-Flora Hôtel 3 Avenue des Plantades, 83210 Solliès-Pont
The Alba-Flora Hotel is located halfway between Toulon and Hyères just 20 minutes from the sea and the airport. All guestrooms are equipped with bathroom with bath and shower, air-conditioning and TV with Canal+. Non- smoking rooms are available upon request.
Enjoy traditional and regional cuisine with a Provençal touch in the hotel’s restaurant. It welcomes you every day in the summer and on week days the rest of the year. The Alba-Flora also offers a swimming pool, a bar/lounge, banquet facilities and free on-site parking.
double room : 66€ (approx £56) per room per night until the 11 July  they may stay longer, but would need to change of room for that.
Please note that this is a current quotation and could be subject to change at the time of booking. The images shown are for guidance purposes only. You may stay in a room which is different from the examples shown.

Will update later regarding Russ once the new has come through from France. 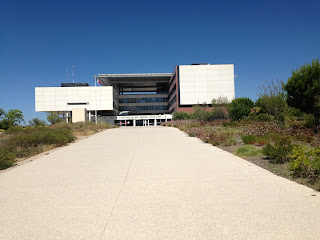 This is St.Annes Hospital in Toulon where Russ is in Intensive Care.  St Annes is a military training hospital and specializes in the injuries that Russ sustained during his cycling accident.  We are led to believe by those in the know that he is in the best possible hands.
Russ has a sunny corner room and has a view!
The hospital is up on the hill about a mile from the centre of Toulon town.  Russ was helicoptered here last Friday from the Charente mountains where he was cycling with friends.
He is surrounded by a myriad of wires, pipes, tubes and computers feeding him intravenuos drugs, fluids and nutrients.  His bed is in the middle of the room and he has little more than a sheet covering him as it is warm and sunny there.  He looks like a sleeping action man.  The bed is an amazing device that changes the position of his legs and back by an degree every minute or so to avoid bed sores.
He has a small wound on his forehead with 3 stitches and a lot of scratches and scabs on his body. He his swollen all over and has an awful lot of bruising on his ribs and flanks.  His pallor is quite pale and grey but it is improving each day.
Yesterday Russ was still on a ventilator as his broken ribs and bruised lungs need some help.  The ventilated breathing has unfortunately given Russ pneumonia which apparently is virtually inevitable in this situation but it is being fought with antibiotics.  It is anticipated that the antibiotics will have their full effect on day 3 of the course which is tomorrow.  His heart rate and blood pressure was good yesterday which was a relieve as he had suffered from Tachycardia with his heart racing at 140bpm for the whole day on Saturday.  The Tachycardia was due to dehydration.  The doctors reduced his fluid intake to stop fluid leaking into the ruptured thoracic region.
The pneumonia has set Russ back a few days again as it is felt that whilst he is recovering from this he should stay in his induced coma for a little longer as he requires a ventilator down his Bronchial and this tube can not be tolerated by someone who is conscious.
He is also on dialysis to assist his kidney function.
I shall send you an update later today when I hear from those remaining in France.
xxxx

Please excuse the non chronological order of this blog but I though you may wish to see the map of the route the chaps were taking on their cycling trip: 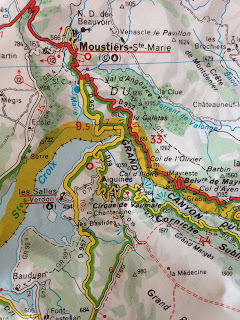 This is the scene of the accident after Russ was removed: 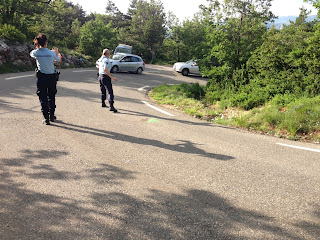 Message from my mum at lunchtime 25th June: