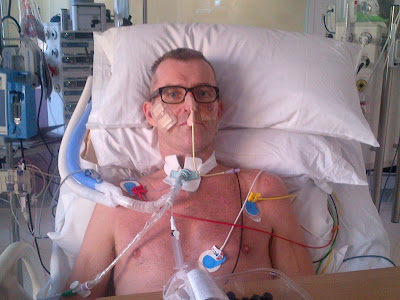 Russ is happily ensconced in his new 5* room at The London Bridge Hospital. I’ve just spent a lovely 6 hours with him, just the two of us (oh, plus the nurse that is permanently posted to his room). Romantic, eh!

Treatment-wise, the medic team are periodically decreasing the ventilation that the machine is providing so that Russ gradually starts to breath more independently. Current estimates are that he will come off the ventilator in a week or two which will be great as that means he will be able to talk again. At this point, the tracheotomy will be “capped off” but remain in place for another week or so until it is clear that there will be no respiratory relapses.

The nurses are incredibly attentive and really looking after him well. They are diligently trying different things to get the pressure sores on Russ’s cheekbones to heal as swiftly as possible with no long term scarring. I told Russ that lots of people pay good money to have “skin peels” to expose the fresh baby skin underneath and he’ll be achieving the same result free… :-s

We had an entertaining evening watching The Dictator. It’s been a long time since Russ and I have spent a Saturday night in watching telly…usually a party beckons 🙂

Talking of parties, a huge thank you to Chrissie Wissie, my “birthday twin” who organised birthday celebrations last night. Plans were to have drinks in the very scenic setting of Chiswick House Park and then go on to her house after the park closed at 9.30pm. Problem was trying to persuade 50 peeps to stop drinking and get to the gates prior to the gates being locked. Needless to say, we didn’t achieve that particular goal and found ourselves locked in the park. We phoned some emergency park warden number and had to assemble in front of the locked gates, maintain a 60 second silence and receive a right bollocking before they were prepared to open the gates and let us out. Absolutely hilarious!! If Russ had been there, he would no doubt have engaged the “beaver lift” to get the ladies over the walls – and a more masculine “leg up” to get the guys over. And, of course, we all missed the ultimate party boy. But the fact that he is now back in London and on the mend, slowly but surely, was the best birthday present I could have ever hoped for. 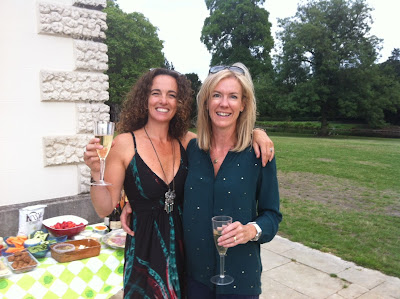