All progressing well in Toulon and the medical staff here (plus the insurers) are preparing Russ for air repatriation either tomorrow or Thursday. Russ will be flown back on a private medical jet from Toulon straight to an airport nearest to the London Bridge Hospital that they can get clearance to land at. I’m hoping to accompany him on that flight but it will depend on how big the accompanying medical team will be and the size of the particular jet that they have available for the transfer. Fingers’ crossed on that front (especially as it just won’t be fair if Russ has flown on a private jet and I haven’t! :-s ).

Russ is very keen to have all comms in place for when he arrives in London so with the undisputed talents of Andy Richards, we are making sure he has his iPhone, IPad and Mac linked up, upgraded and in super-functioning order. So, get ready for onslaught of texts and emails from the man himself….

Andy recently sent me the brilliant photo of Russ below under the strap line “Typical bonkers Russ”. Poor Andy popped over to pick up some glasses from our house earlier this year and was confronted by Russ looking like that!!!

Peeps out here with me at the moment are Dan, Saskia (and kiddies), Oli Smallman and Mad Nicola. Oli and Nicola saw Russ for the first time (post accident) last night and Oli described it as completely “uplifting” to see him and, in particular, to witness how amazing he is doing given where he was only 6 weeks ago.

Oh, and we’ve managed to engineer a haircut for Russ later today. One of the nurses is going to bring in some clippers. He’ll probably look like a jar head after but definitely preferable to looking like he was the inspiration for the male figure in the “Joy of Sex” books that were published in the 80s. Who remembers those………….? :-s 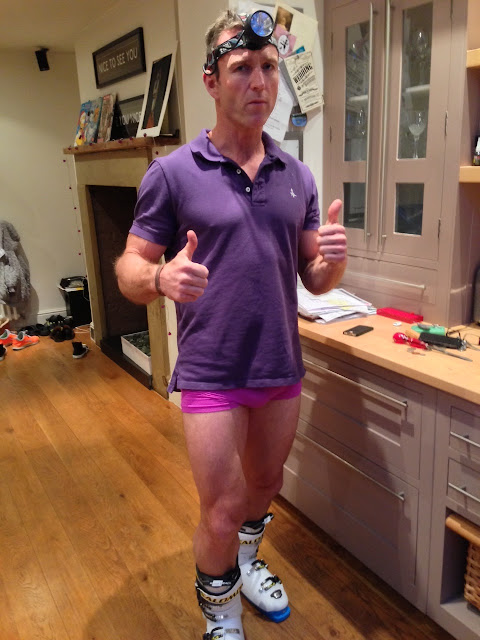 The photo I took of the dear boy just after Xmas. Classic bonkers Russ.

Thinking of you all – Russ, you, the girls, family and friends – everyday.
Much love
Andy x