My mum, Jenni has just sent the below to the staff at the ITU ward in Toulon:

I think it says ‘Thanks’ for sending Russ back to the UK alive.
Thank you letter to Hopital Sainte Anne 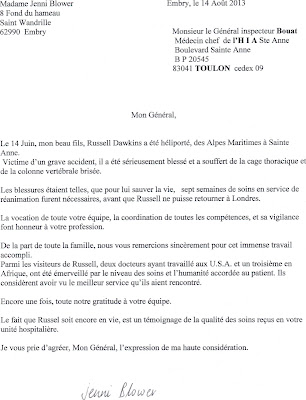 A day or so after Russ arrived at Sainte Anne, a French man was also brought into ITU in a near by room.  The wife arrived shortly afterwards with her two daughters who are a little younger than Lily and Amber.  It appeared that the woman had left home as soon as she had been told her husband was gravely ill and had traveled some distance as for the following week or so the family, although clean and tidy wore the same clothes day in, day out.  Dani brought chocolate to the hospital for the two girls as they and their mum kept vigil at the hospital like Dani.  At the time it wasn’t appropriate to ask what the situation was but we learnt after a fortnight’s struggle, the husband sadly died.  He would have been a similar age to Russ and it really brought home the severity of the whole situation and how lucky we are all to be telling a different story.
Melissa x