Aha – yes! I’d totally forgotten about having to pee in the basin!!!  Funny though – you bugger!
Have still got a photo of you wearing a false beard because Nigel had banned you from the Woodville so we had to smuggle you in to the downstairs bar and once you were safely sitting in a dark corner you had to stay there and pee in an empty glass in case you were discovered……….in fact Roger has managed to scan said photo and I have to say that there’s a sneaking suspicion of a MULLET haircut behind that beard!!!!!
Have also attached Harry’s 2012 for your further amusement….
Cheers for now,
R&R XX 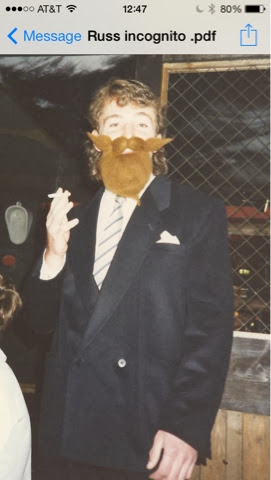