My Magnificent Brother I’ve just returned to my hotel from an evening with Russ at LBH. It’s the first time I’ve visited him since he returned to London. When I last saw Russ, he was still being kept alive by a ventilator, via a tracheotomy, which prevented him from speaking and eating solid food. My god, what a difference! When I walked into his room, it was like seeing the Phoenix who had risen from the ashes. Apart from being a great deal thinner than pre-accident, he looks like his old self again. My magnificent brother has been returned to us! On Sunday I called Russell’s phone from the US, on the off chance someone might answer it and relay my birthday wishes. To my amazement a voice I hadn’t heard in 2 months answered. I asked incredulously, “who is this?”. The voice replied “it’s me, Russ”. I replied by saying “Holy !!!!! , you were the last person I expected to pick up”, to which Russ answered “well who the !!!! did you expect!”. Apart from the day after his accident when I first saw Russ in Toulon, this was the most emotional milestone for me so far, in his miraculous journey to recovery. I have to admit, when I first saw him in Toulon, I didn’t think we’d get the chance to celebrate another birthday together. Tonight we talked about his injuries and we talked about the future. We talked about the challenges and the adventures ahead of us. We talked about what matters most to Russ in light of the change in direction his life has taken. I saw a different side to my brother. He has a calmness and patience about him, as if life has slowed down to a pace where he can reflect on his achievements and in particular, his love for his wife and girls. Up until this point, Russ has hurtled from one race to the next, always testing his physical limits, devouring the competition. This comes at a price. We only have a limited amount of time to appreciate our loved ones and in a funny way, this situation has given Russ the time to balance his pursuit of physical excellence, with the chance to focus that energy on his family (at least for now). I love my brother, always have, but it’s only because of what has happened to him that I am able to freely and easily tell him so. Dear Russ, thank you for holding on for us, we will cherish every day from now on. Alwyn. P.S. the walls of his room are literally covered in birthday cards and pictures sent from family and friends. I couldn’t help reflect that if this is the number of cards he’s received from people who care about him, imagine how many he’d get from people he’s offended! Alwyn. 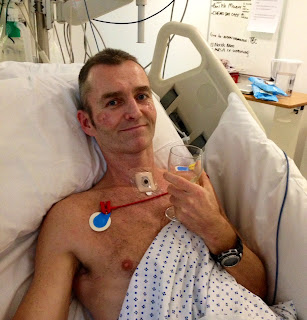