The Operation has gone wrong
Some Screws have come out, or worked loose.
He has to do it again, with a greater chance of infection setting in this time.

I am totally blocked up inside, I’m spasming quite a lot once more.
I feel extremely down and have lost my brief sense of positivity.

I really wish they’d just bloody inject me with something nasty, as I really have had enough.

Having had virtually no spasms for 7 days, they seem to be back, tho not like before.

As I’ve spent most of my time lying down for 8 days, and I’ve had many very strong painkilling injections and pills, it’s not been a realistic test of my new spine.
I shouldn’t really be judging it just yet, as I have another 6 hour operation starting at 9.30 am on friday – where they fuse and cage my L2 and L3 vertabrae, to make solid the base of my spine – but I’m wondering how it’ll all turn out.
The combination of bed rest and strong painkillers has made me very constipated, so I have that challenge too, without any obvious resolution strategy.
To say this shit rules my life, would be accurate.

I seem to have pulled a muscle – a lat – in my left side, which doesn’t help me to move in the bed, which is almost impossible anyway, as it’s an inflatable mattress to help prevent pressure sores.

They’ve ceased the stronger painkillers to help me ‘ go ‘ so I’m hoping that might work, as the pain coming back isn’t that nice.

Thanks to Roy,and to Lisa for visiting, and for the many messages I’ve received.
It does help.

A few people have asked where I am.

So I’m in LONDON BRIDGE HOSPITAL – where I was this time 3 years go, after a flight from Toulon.

Back then I was under the care of Jonathan Lucas, surgeon, and he’s the doctor who has just operated, and will do my next op on Friday.

So far, I’m doing ok, and making progress faster than they anticipated. 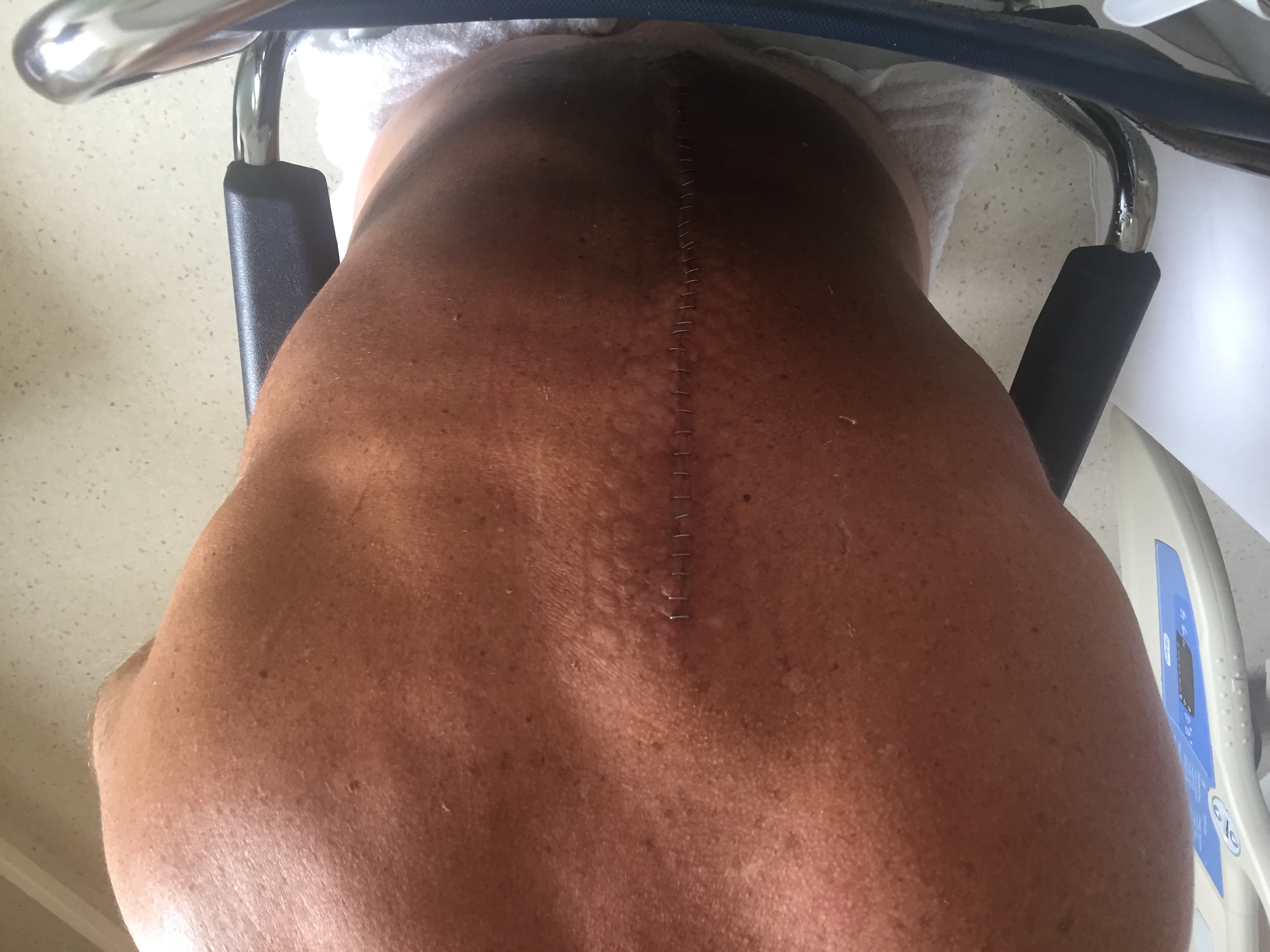 These days they use a staple gun ( like they use on chair cushions ) rather than sew you up with a needle.
As my surgeon said to me, they were tired, it was late, and it’s been a long operation, so they went for the easy option of staples.
I imagine that taking them out would be more painful for the patient, however.

Since there are 45 staples, it might go on for a while.

So from not being able to cough 36 hours ago, we got as far as me transferring back into my chair today – big progress.

Because my pelvis was up on the left side, and my spine curving way over to the right, then back to the left, my chair cushion and back rest set up was to try to make me straight to compensate.
Now that my hip bones are symmetrical, and my back ramrod straight, when I get in the ( compensated ) chair, I’m leaning to the right – which is the strangest feeling, after 3 years of leaning to the left.
I will need a different cushion and backrest obviously, but this stuff doesn’t happen fast.

Tomorrow I’ll be able to go outside the hospital, if I get a push, and that’ll be a week earlier than I’d thought that might happen. They’ll take a layer of dressing off my back wound too, tomorrow, which should take half an inch off my back.
My next op is in 7 days, and that’ll knock me for six again, but quite possibly a further 28 days in hospital after that may not be necessary.

I do have to be realistic and stay in hospital until I’m able to be fairly self sufficient with ‘basic functions’, as I don’t have a nurse at home.. so I’ll have to guage that carefully and counter the desire to get out hospital.

In the meantime, I’ve a lot of people to thank for their messages of concern about my welfare, to the staff for looking after me, and to Marky P, Lily and Dani for visiting. I seem to have slept for a fair bit of today, the sleep desire just seeming to sweep over me in seconds, something I’m not used to, but one which is very welcome, I can tell you.

I’ve just had my last intravenous antibiotics injected, so after that it’s back to swallowing loads of large tablets.

It’s taken me 3 days to watch a film, whilst here, so I’ve still to be converted to a telly watcher. Maybe I’m just not destined to get there. 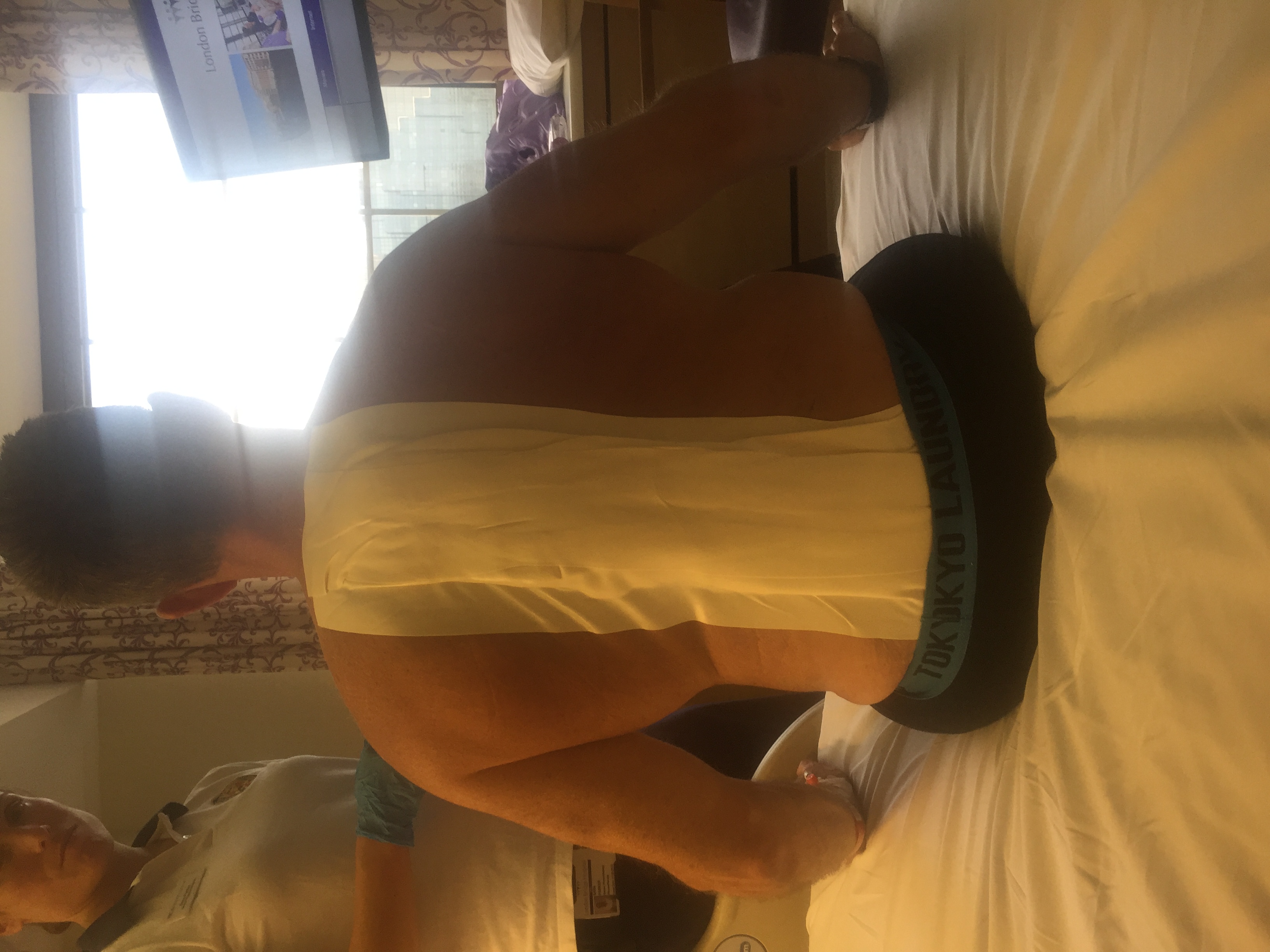 It’s either the surgery, or I fell onto a very large sanitary towel.

A day later, and the pain has decreased significantly.

This was never about being less paralysed, only about posture and discomfort and spasms. The physios helped me to a sitting up on the edge of the bed position yesterday. Although that sounds good, it’s not something that I can feel, since I can’t feel anything through my bum, legs, feet etc. But I could appreciate that I was straight, that I wasn’t leant to one side, that my shoulders were further back, and despite not feeling anything, that it still felt very different to pre op.

I haven’t had any spasms at all since the surgery, which is a very good sign, I’d say, and my surgeon said I’m way ahead of where he thought I’d be in terms of recovery. That implies that my hospital stay may well be shorter than the 6 weeks that he and I were primed for.

Thanks to Lisa ( from my Uni ) and Leigh ( from even further back – my school ) for visiting me, and to Amber ( not Amber, my daughter ) for coming last night.

I’ve just pushed the button on my hospital bed that makes me sit upright, but 2 minutes in now feel very light headed, so I’ve pushed the other bottom that lies me flat again, though I’m still feeling dizzy, and extremely tired.
Since the op, tiredness has been extreme, and I literally can’t stop myself falling very quickly into a deep sleep – as I can tell I’m about to.

At 5.30 PM on Tuesday I was given a general anaesthetic and wheeled into theatre. The operation to rod and bolt my spine into a straight line took 6 hours and I’m sure was quite noisy, every vertabra being drilled into so that the titanium rods could be screwed in.

I now have a scar running from my bum up to my head, and I doubt it’s pretty. I won’t ever see it, as I can’t stand up and look over my shoulder into a mirror.

To say I was in pain would have been a drastic understatement, with morphine not really hitting the spot.
I soon learnt that coughing was to be avoided at all costs, as was trying to reach out for something with either arm.

As I have to be rolled a little every 2 hours to avoid pressure sores, I don’t get the luxury of sleep either, though I have dozed intermittently for sure.

They can roll me a little to my left, but any attempt to my right is just a no.

I woke to see Dani’s face through the oxygen mask – that much I recall – but I don’t remember asking her where I was apparently every 2 minutes for an hour.

As I’m a long way from being able to sit up, I’ve yet to appreciate a look at my regained straightness, but I am aware I think of the changed appearance of my chest, which seems more expanded, as I think I am less round shouldered than I was 36 hours ago.

I have had countless messages pre op and post op, every one of which I appreciate, and even some visitors – my girls plus Neal and Debs.

Yesterday morning I met the physio that’ll be working on me this week, and to my delight it’s the same absolutely lovely one that I had 3 years ago here, following my return from Toulon.
Sarah must have seen thousands of patients over the last 3 years, and in fact doesn’t even work here any more, yet happens to be here for the next week and has me as a patient. It was lovely seeing her, and she held my hand tightly for ages. Given that 3 years ago I was like a skeleton, couldn’t speak as I had a tracheotomy, had mucous sucked out of my throat every ten minutes, day and night, had awful weeping scars on my face and had alopecia, I must look a whole lot more healthy this time around.

I’ve just remembered that last time I was here, she was trying to get my right arm working, despite me saying how much it hurt. That went on for about 2 weeks, until a doctor appeared and said they’d forgotten to tell her that I had a broken right collar bone.

I do have a TV, but thus far only watched 15 minutes of that British Bake Off thing ( that I’ve never seen before )
My God, how rude are those judges to the bakers? Since when was a cook able legitimately to be so unkind to someone, on national telly, over a bloody cake?

Whilst I don’t think I’m nervous, I must be, as I feel really nauseous, which isn’t a familiar feeling – at least not whilst sober.

The op may actually take 6 hours.